Exhausted from the weekend.

Crazy weekend. Of course, Friday night was Halloween. We had a blast. No injuries or disasters. Happy to have survived it. My daughter was a great skeleton.
Saturday night we were at the Humane Society Rags and Wags event at the Music Hall. Bummer that it was during the Tech game... but it was a good time. Our dog, Diva was a model for a high end designer necklace, so I walked her down a runway with other celebs including Carol Keaton Strayhorn. I certainly  don't consider myself a celeb, but I was nice to be included. As if the weekend wasn't busy enough, Raleigh and I headed out for some Father/Daughter fun on Sunday. We went out to Driveway Austin to buzz around the track. I just got her her own helmet, which she was excited about. We did a few hot laps, went fishing for about an hour. She's much better at casting than I am...as she pointed out. And then we took the old jeep out for some off road fun. Great day until her hamster, Squeeky went missing. She likes to put him in this bowl on our coffee table. While he was in there, she was on the back deck messing with her jack-o-lantern. You know, stabbing it and and stuff. When she went back in, he was gone. He is either still in the house or he went out on the back deck too and fell a couple of stories. Hope he is still around, she's been pretty upset for the entire eve. 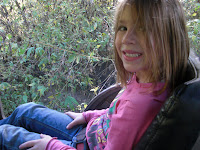 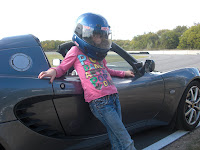 where on earth do you go offroading around here??