The world is getting smaller 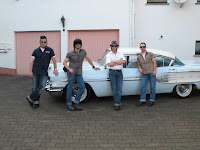 This is evidence. Earlier in the year, I put my Pontiac up on Ebay. I didn't expect to get much for it and I really didn't, but it needed a new home. I didn't have time to bring the car to full restoration, although it's the closest car to finished I have ever owned. I wasn't able to drive it with the family because it didn't have seatbelts and I was hesitant to alter an unmolested, original car. A guy in Germany bought the car. His name is Frank and he's a Pontiac fanatic. The car was trailered to Houston and then put on a ship. It took over 2 months to get to Frank. We both almost bailed on the transaction several times, not trusting each other. It's a scary transaction on both sides, it takes a lot of trust.
We finally got the deal done and Frank sends me pictures from time to time. He has two young kids that love the car. I can't imagine how rare it would be to see a '58 Pontiac in Germany.
I hope I get to go visit Frank, his family and the car someday. I miss the car but I am so much happier that it found a better home.
Posted by jb at 1:50 PM

I know how you feel, these cars are magical! I had a '56 Buick Super as a first car. Some kid bought it after I went to college and wrecked it. I would LOVE to have that car now!